A Week of Quadracious Training

I write this from Lamberton Place, St. Andrews, Fife, Scotland. When I went running here I passed sheep grazing on green grass in the cool, long days of a Scottish July. This has been a particularly quadracious week of training. It started at Hainan Island, China’s Hawaii, it is called, where I spoke at a turfgrass conference and went running out of my hotel to the beach and turned left for Sanya. Running along the beach, every 500 meters or so I passed another young lady in a wedding dress pseudo-playing a piano as soft waves from the South China Sea lapped at her ankles. Her betrothed knelt at her side while a photographer with a large Canon snapped photos for their wedding album. See here the view from my hotel at Hainan.

From Hainan I went to Bangkok, where I ran twice, which is rather amazing considering the tropical rains that fell while I was there. I went out for an errand, encountered a thunderstorm, and then saw this street scene as I waited to get a taxi.

You can imagine that my usual running park is much less crowded at this time of year. 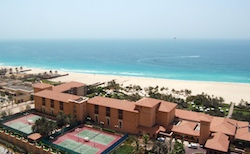 So after braving the wedding photographers and (apparently) waterproof pianos at Hainan, and the rains and floods at Bangkok, what better place to run than Dubai? I went for a late afternoon run along Jumeirah Beach. I saw two camels on the beach, but not many people. Perhaps they were deterred by the searing temperatures.

So in a week I had a chance to run at China, Thailand, United Arab Emirates, and the United Kingdom. That’s what I call quadracious.

Scientist, author, consultant, and founder of the Asian Turfgrass Center